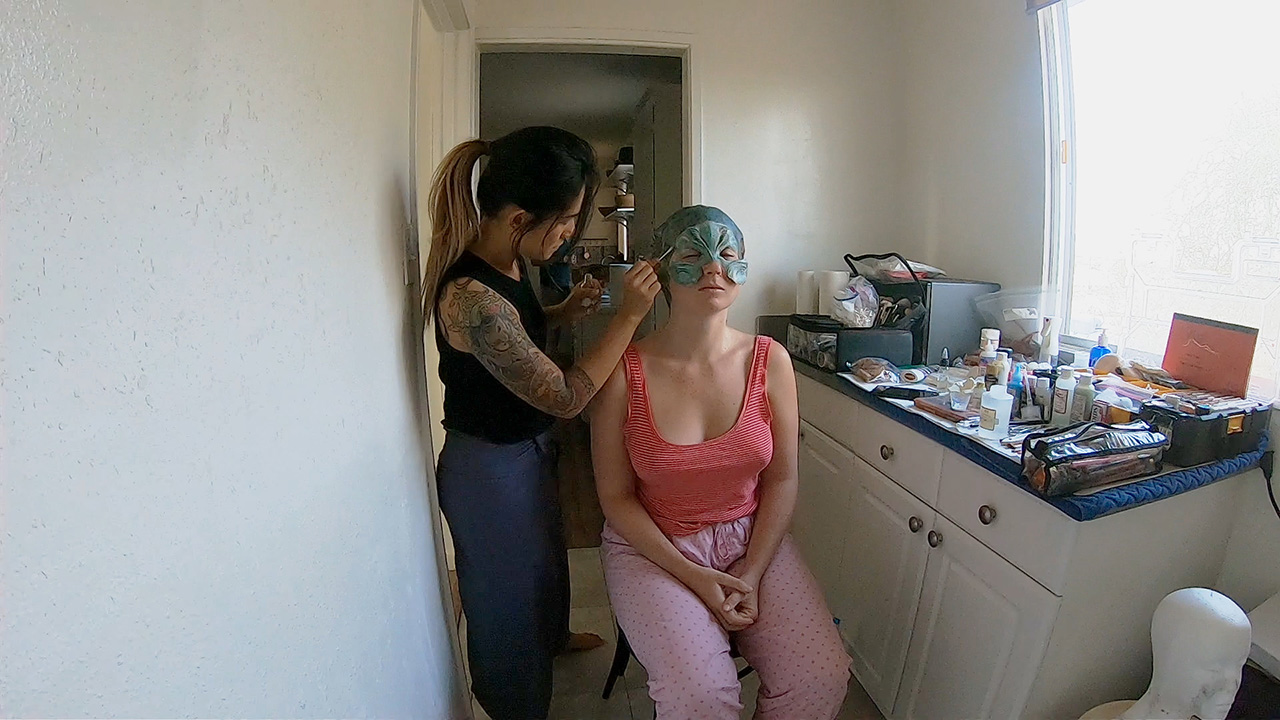 Behind the scenes timelapse footage of special effects alien makeup, prosthetics and body paint being applied by Makeup Artist Thirati K on actress Kaitlyn Clare for the film, Nowhere In The Universe. The film was produced, directed and written by me and produced by Gate5, a video production company in Los Angeles.

Unfortunately, we weren’t able to get a timelapse of the whole application but this gives you a little taste of it.

The film is a sci-fi comedy with a fashion element about desperation, dating and personal limits and how some lines can never be crossed.

Aliens, aliens everywhere! What’s a makeup artist to do?

For the look of the alien, Thirati wanted to create something unique. It’s a real challenge since it seems like aliens are everywhere you go. Between movies, TV shows, Halloween and youtube and instagram beauty bloggers, we’ve all seen it all! She pulled it off by creating a unique shape of the head with the prosthetics and with her colors for the face and body painting.

Another thing that I think helped in creating a unique look was forgoing contact lenses. I’m really glad we decided on that as I wanted the alien to have human qualities and not a cliche look. Unless you spend a lot on the contact lenses to get something unique, you’ll wind up with alien eyes that you’ve seen a million times. Not to mention, Kaitlyn’s naturally beautiful eyes complimented Thirati’s work perfectly and she had just the feel and look I was going for.

We shot the film in two locations in the high desert. The first place was about 25 minutes north of Amboy, home of the famous Route 66 icon, Roy’s Motel & Cafe. I had a chance for a quick stop at Roy’s during the location scout. The day I was there, a bus full of tourists had stopped and the place was full of selfie takers.

The motel isn’t operational but the doors are open to the rooms for you to go in and check out. The gas station is a gift shop. I’m not sure if the gas pumps work. I should have checked. I considered filming in the barren desert next to and behind Roy’s but I found a much better spot.

The second location was about 20 minutes west of Twentynine Palms and only 15-20 minutes from the Airbnb house we were staying at. The two locations were about 1.5 apart.

Thirati started putting on the alien makeup, prosthetics and body paint at 6am. It took about 5 hours to apply and having to shoot in two locations about 1.5 hours apart, we had a very full day of filming.

That’s one thing I wouldn’t do again, shoot in two locations that far apart when the makeup will take 5 hours! Ha!

After getting Kaitlyn in her wardrobe after the makeup and body paint was finished it was about 12 noon at that point and I started to get a little nervous about making our day. We still had an 1.5 hour drive to the first location! What was I thinking? Arghhhh!

Since the story takes place during the course of one day, following the alien’s trek through the desert from morning to evening, we we had to shoot the film in chronological order. Usually you don’t need to do that but in this case, there was no way we could not have. It obviously wouldn’t have worked shooting the ending of the film at 1:30pm when the sun as at its highest point and then shooting the beginning at sunset. The time of day was part of the story.

At about 1:30pm we got to the first location and we all moved as quickly as we could. No one felt rushed, including myself at this point but we had no time to spare. We were pretty efficient getting the shots we needed and then it was off to the second location which we arrived to at 4pm or so. I’m not really sure what when we arrived. I didn’t even want to take the time to look! It was crunch time.

No time to spare!

Sunset was around 7:30pm so we had to work fast as we had the bulk of the filming to do and only 3.5 hours to do it. Fortunately, the filming itself was very straightforward with shots of just Kaitlyn and the final scene between the man, played by Brandon Bernath and the alien. I knew exactly what I wanted out of the shots and scenes so we were able to move quickly and change things as needed when I realized some of the preconceived ideas I had in my head weren’t going to work with the given circumstances.

We literally shot right up until the the sun went down. The last take was at the last moment the sun was above the horizon. It was tight but we got everything we needed and was a great day!

About Gate5, a video production company

If you have a narrative film or commercial project you want to collaborate on just give me a hollar. I’d love to hear about it. Contact me to discuss.